I visited the Prince George county offices this week to return a meeting room key.  A routine matter I have performed many times.  On this visit I decided to park in the far corner of the lot in front of the courthouse.  There was shade to keep the car cooler and a chance to get in a few more steps.

On my somewhat shortly lengthened journey I crossed over the memorial square with its unsheltered benches and fountains, all dedicated to deserving families and loved ones. I found, again, the paver donated by the Prince George Democratic Committee.  I then remembered  that once before I had seen a paver that intrigued me, but couldn’t exactly remember why.  About 25 minutes later I found it. 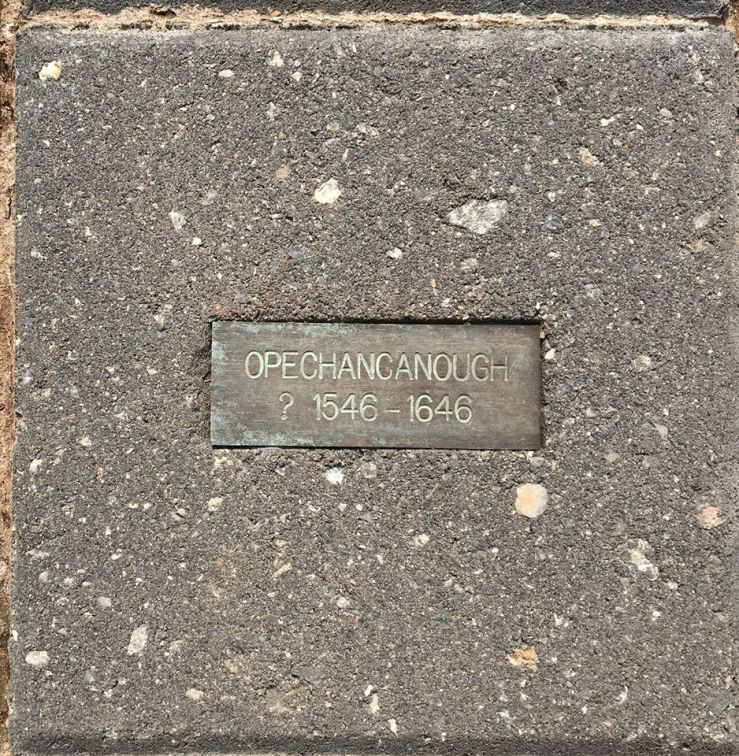 Opechancanough, ? 1546 -1646.  Obviously, I assumed, Native American. Just today I remembered the paver and the photo I had taken.  I had been watching the PBS Fourth on the Mall celebration with no reference  to the peoples watching the Europeans disembarking on these shores.  On to Wikipedia, learning that Opechancanough was a Powhatan chief  of a major village along the Pawmunky during the arrival of the Jamestown settlers.  He was never enamored of or even very tolerant of the late comers in his midst.

How would he have vetted us (European immigrants) had he had the chance? Would he have been swayed by the arguments of freedom to travel, free trade, this land is your land, this land is my land rhetoric? Unlikely.

A greater mystery to me is who paid for this paver? I would like to know who made the effort to recognize that it is the Europeans and their slaves who are the immigrants.