This meeting was the second of two citizen input type meetings to be held by the county in this round of a strategic plan.  The first meeting was held in the government complex area and had only a handful of residents participating.

The second, held on May 14,  in Disputanta, attracted 17 citizens and included two Board of Supervisor members, Alan Carmichael and Floyd Brown, Jr. (“FJ”).  None of the denizens appeared to be younger than 50.

After some circular discussion about how to attract tourism, commercial amenities, and sports tourism, in general, the discussion turned to workforce development.  This topic occupied about an hour of the roughly two-hour meeting.

One of the consultant’s described some of the workforce demographics. One of the most striking was that 85% of employed Prince Georgians out-commute to other localities, though if the Crater corridor is considered as a region, that figure is probably closer to 50%. Another surprising demographic gleaned from the county’s website indicates that the County Government is the single largest Prince George employer with approximately 1600 of the 14,000 jobs in Prince George. Missing from that figure was how Fort Lee employment is cast in the numbers.

Infrastructure issues loom large and affects attracting new businesses and providing a variety of house stock.  The primary challenge is wastewater capacity as the county does not have its own facility for treating wastewater, relying on the services provided by the sewer authorities in Hopewell and Petersburg.  Prince George is very near its maximum allocation from both entities.  This topic challenged the discussion in the room.  It is harder to get one’s arms around this aspect of infrastructure.

It will be interesting to see if any new ideas emerged in the discussion.  It would seem not, but 17 Prince Georgians are more informed, perhaps, as a result of the meeting. Check out the 2013 Economic Development Strategic Plan on the county website.

One might argue that I don’t really live in the country.  I have a Food Lion about 5 miles away, a Starbucks about 10 miles away, Comcast cable (now Xfinity), and excellent cellular coverage.  But, in defense my self-proclaimed avatar as a rural warrior princess … I do have well water and a septic tank.

Well, no pun intended, I awoke to absolutely no water on Monday.  For some reason my well pump and/or pressure tank of 36 years had mysteriously died.  Mind you Monday was Martin Luther King Day.  Finding a plumber or well service open on such a day was a tall order.  Finding a plumber that dealt with well systems was even taller order.  Fortunately, our neighbor across the road is a great networker, keeps his home in good nick, and is a go-to resource in such situations.

Steve recommended Charles McCann of Done Right Enterprise as the man for the job.  He took the additional step of encouraging Charles to take care of us on as timely a basis as he could.  I am not sure Charles would have appeared later in the day with his wife and partner, Marie, without the recommendation and endorsement from Steve. Charles assessed the situation, provided his licenses, and gave us the estimate of cost and the promise that we would have water the next day.

The next day he appeared as promised with crew and equipment, new pump and pressure tank and encouragement that all would be well.  Again, no pun intended.

Tuesday, late afternoon, we had water and a promise from Charles and Marie that they would reappear on Wednesday to install the pressure tank.

Awaking Wednesday I jumped into the shower to clean up for my Rotary meeting … low and behold, I had failed to turn the breaker back on for the hot water heater.  It was a very cold and very short shower. 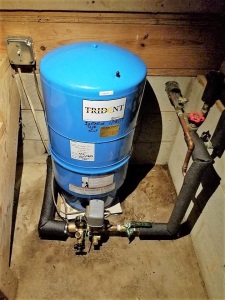 Fortunately, Charles is a master electrician as well as a master plumber so he could install all the switches and connectors necessary for the new pressure tank. Finishing around 8 pm with the installation of the pressure tank, Charles and Marie climbed wearily into their work truck and in short order had texted copies of our warranties, pictures of the job, and copies of the paid invoice. Our water adventure was over.

Now, I think I am going to have our septic tank pumped and checked.  I am not up for another adventure of a mechanical nature.

There were other less noteworthy adventures …

The Prince George Board of Supervisors had tied votes on the two nominees to serve as Chairman of the Board.  One member was absent due to a workplace accident. The next meeting should result in one of the two being elected … more about that next time.

A Petersburg citizens group called Clean Sweep filed petitions to have the Mayor and Vice Mayor removed from the city council.  That should have an expedited fuse.  It is an uphill battle, but at least the citizens are involved.

The City of Hopewell continues to recruit for a Finance Director as the last one abruptly resigned a couple of months ago.

These matters pale in comparison to my own personal dramas.